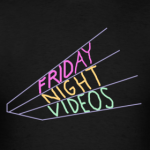 The logical follow-up to a post on The Midnight Special is an ode to Friday Night Videos, something that is absolutely part of the GenX experience, as we were likely the only generation to have cared.  Not a lot of people got as excited as I did about The Midnight Special.  Perhaps this one will be more meaningful.

Watching music videos is a teenage pastime born of my generation. I recall a decent amount of controversy in the beginning.  Some said that video ruined the pleasure of listening to music.  Others claimed that it ruined the personal interpretation of songs by proposing a specific plot or theme through its visuals.  There is no doubt that music videos were motivated by marketing on some level.  Beautiful (looking) bands were in a position to particularly benefit from them.  (And if a band wasn’t pretty, you could always use make-up or add an attractive female… or both.)

But some performers took advantage of the artistic opportunities to tell a story.  Duran Duran did this by hiring up-and-coming director Russell Mulcahy to produce their videos in gorgeous locations with “exciting” plots.  A-ha’s video for Take On Me married live action with animation, and likely caught the attention of more than just the teenage girls who were their fan base.  Michael Jackson took it to a new level with the 13-minute Thriller, directed by John Landis.

Friday Night Videos was many then-teenage GenXer’s introduction to music videos.  Access to MTV was limited.  In our town, it was a “premium” channel not included in the basic cable package.  Even if you had cable, it was hard for some young people to convince their parents that watching music videos was as important as having access to the collection of film features available on HBO.  I saw my first videos on HBO’s Video Jukebox (as my parents questioned the relevance of watching music), but Friday Night Videos changed every week, whereas Video Jukebox ran the same series for a whole month.

The show, which launched in 1983, was developed by the same people behind The Midnight Special.  These guys were “rolling with the changes” — to quote a band that didn’t fare so well in the age of video — but the fact that videos had to be far less expensive to air versus staging live acts must of have been an appealing factor.  Check out this intro to Friday Night Videos from 1983.  I imagine this was captured on someone’s Betamax.  (It always amazes me how some people managed to keep the Betamax around long enough to transfer the contents of its tapes to digital.  I’ve chuckled a few times when I’ve seen old Betamax machines in someone’s basement, but it appears that the joke is on me.)  You’ll see that the usual acts were lined up for this Friday night in August of 1983.  They even have Duran Duran going head-t0-head with The Police in the Video Vote, which I was never able to weigh in on, as it required making a 1-900 call.  (If you were one of the “cool kids” who were allowed to use the phone to voice your opinion, let me know.)

YouTube is not a great source of material on Friday Night Videos, as it is for The Midnight Special.  Perhaps Time-Life needs to work up a Friday Night Videos DVD set and sell it on late-night TV.  We can see all the videos themselves on YouTube, but how many of us have the energy to curate it the way NBC did back in the 80s?

One thought on “Next Was Friday Night Videos”