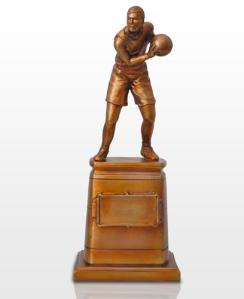 It was about three years ago that my father-in-law passed away, the first of my husband’s and my parents. Anyone who has been involved in the process of taking, giving, selling and/or donating after someone’s death knows that it’s difficult to predict how people will react when faced with an entire house worth of stuff. There are things you know you’ll treasure, but there are also odd little scraps of that person’s life or your relationship that will emerge in the form of an old dishtowel or a worn VHS tape of their favorite movie. (My grandma’s copy of The Way We Were is one of the few things I took when she passed.)

My father-in-law had loads of trophies from various teams he was on when he was a younger adult. About two-thirds were lined up on shelves in his office, part of a shrine to sports, which included a Wheaties box with his photo and other autographed items from pro athletes. The kids toys were in there too, and the wall was kind of “just there,” among the objects of his current life.

After his death, we had to find something to do with them. Parting with the physical remnants of accomplishments is tough, and they sat in our basement for more than a year while we considered the options. It seemed so sad to let them go, and we didn’t want them to end up in a landfill. My husband took photos of each one and asked me to record them in a spreadsheet. We kept some and donated many on craigslist.

As I typed in the details, I could picture him in his basketball tournaments and bowling leagues. When I first met him, he was still active, but not like he was in his 30s and 40s. My husband told stories of being at his softball games, but they were about running around and being a kid. Even with dozens of trophies on display and others in boxes in his garage, I never took note of what it meant… a source of passion and pride. Witnessing my father-in-law’s possessions outside of the context of his daily life gave me a deeper understanding of him.

One of my father-in-law’s teams was called Bad Company. If I have the story right, he used to play the song of the same name on the way to games. This song is something else to remember him by.

4 thoughts on “One man’s treasure…”