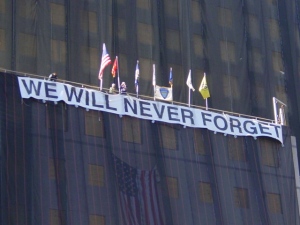 Yesterday my daughter had an assignment for social studies… to come home and ask a parent to describe 9-11 in one word. It was hard to think of one that would offer more meaning than horrible, scary or sad. It is all of these, but as we are distanced from the events by time, there are other words that come to mind. After writing down several, the one I chose was “end.” The moments before I got the phone call from my husband telling me to turn on the TV represented a different world, one that hadn’t yet revealed the bad side of possibility. For many of us, the violence of severe political, religious, etc. conflict was at a substantial distance. The destruction of the Twin Towers put it right in front of us.

Optimism is not gone, nor is faith or hope — all those things that help a community or nation recover from such a thing. We have witnessed that life goes on — 13 years of it, in fact — and we see those things reflected in our remembrances. But I imagine that for most of us, those concepts are tainted a bit by that day.

GenXers were getting a foothold on their adult lives when 9-11 took place. The oldest of us were just reaching our mid-30s. That day was devastating for so many people across generations. For us, it might be considered a loss of innocence, that time when our invincibility was called into question.

I told my kids yesterday that I once had a key card to a hotel room near the Twin Towers that had to be torn down due to the destruction. It was from a trip my husband and I took there only a few months before 9-11. The kids asked why I kept it. I didn’t have an answer, but maybe it was because it was a piece of the world that existed before.