Who knew that cleaning out a basement would provide so much material for a blog? Well, I kind of did, but I had no idea what little treasures I’d find back in dusty corners among 30+ cans of left-over paint (not our fault — previous owners were ridiculous about keeping them), garbage bags filled with concert t-shirts, and countless bins of toys illustrating consumer culture gone berserk (actually, I made the kids reduce this by 50 percent last summer).

If you are a GenXer and you’ve made it to midlife, you’ll appreciate the following… and you might even have similar sorts of things in your own basement.

A library of mixed tapes. When I say “library,” I imply that it has been catalogued… curated, if you will, to include the very best music of my time. But to say such things about my collection of mixed tapes is misleading. As I read the card inserts of the cassette cases, it became clear that the music I felt worthy of transferring from one tape to another (or record off of WVUR) was disappointingly limited. How many mix tapes should I really have created including The Smith’s “How Soon Is Now” and When In Rome’s “The Promise”? I am a good 20-plus years past my youthful prime, and I have more diverse single playlists on my iPod than what remained of my entire collection of mix tapes.

Actually, this box represents only a fraction of the mix tapes I found. It was filled to the top. For the record, the Rush and Anthrax belong to my husband (or one of his former roommates). Those are his toes too.

Other relics of modern technology. Cassettes were to music in the 80s what CDs were to encyclopedias in the 90s — a brief interlude of technology that put what used to take up so much space (10-inch vinyl, a bookcase full of texts) on something much smaller and more portable. Now you can get much of what was previously available on these formats on the internet — for free or a small fee. But for a short period of time, the idea that you could take a 32-volume behemoth and capture it on a thin round piece of plastic was so revolutionary, even Microsoft got into the act.

Fashion history. You knew it was coming, didn’t you? You thought, “Is it possible that these people have a pair of parachute pants in their basement?”

Yes, when everyone else dropped theirs off at the Goodwill in 1985, someone from my family kept his in a pile of clothes that, while reduced to only a few garments by now, still contains this pair in cement gray.

But does he still fit into them? That’s an answer that will remain unpublished.

No young man circa 1984 would feel completely dressed without a matching Members Only jacket. But this one is even better — it’s a vest. And it’s a coordinating shade a gray, making it the perfect piece for the monochrome look. BONUS — it still fits!! Back in the day, if this dude had walked into my hometown’s teen disco, The Casbah, I would have faced some tough competition! 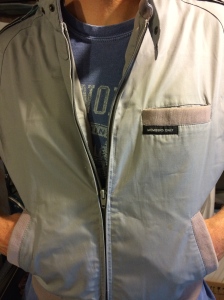 Religion notebook doodles only a student in the 80s would make. My husband received As in Religion (Catholic school), but you wouldn’t know it from the cover of his notebook. Perhaps he was trying to hide the secret to his success behind these stylized band logos. Either that or, Dude, Jesus must have totally rocked in the 80s.

And if Hubby was hiding A-worthy notes behind the cover, could this be his visual interpretation of the Crusades? 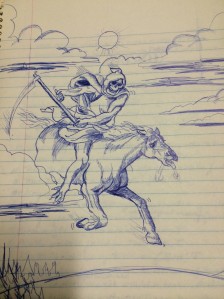 I didn’t attend Catholic school, so I am not one to judge. But I wonder what Sister Mary Joseph made of this art.

In my teen years, Hit Parader was the alternative to Rolling Stone that my mom would let me buy due to RS’s “mature” content, though I’m not sure how she came to this conclusion. The artists always looked much less stoned on the cover of RS than mags like Creem and Hit Parader.

This particular issue features Jon Bon Jovi on the cover (yes, it says “Too hot to handle” just below his name), with the promise of updates on other bands like Def Leppard and Poison, along with a Cinderella centerfold. (I’ve gotta ask, did people really tape Cinderella to their wall?) The neon pink masthead is a nice touch too. I wonder if they did that because they had a heartthrob on the cover.

Don’t hate me because I have a Weeble. Not only do I have one of these in my basement, I have a whole Weebles Treasure Island Set! Of all the things that I found in our basement, this Weeble is probably the one thing that elicits the most envy.

My journey - The good, bad and the ugly