If you’ve seen my previous posts, you are aware of my appreciation of Duran Duran. But, lately it’s been more about their music than ever. And as I’ve brought together the teenager and midlifer in me, I’ve been paying more attention.

When this song came out nearly 20 years ago, I was in my twenties.  Although I bought the CD, I didn’t notice the song all that much.  Ubiquitous radio airplay and maturity beyond my Tiger Beat perspective left me less interested in the band in general. “Ordinary World” was a ballad. I assumed it was about failed romance, and at that age this kind of song elicited a shrug and a nod, but no more.

After reading John Taylor’s biography, I learned that this song was inspired by Simon LeBon’s feelings at the loss of a friend to suicide. Maybe you knew this before, but I didn’t. Listen to the lyrics. You can really feel it. And you can hear the sadness in the music. It’s textured and beautiful, and I can’t imagine it done any better.

Songs like this arrest me. I’m convinced that if I am ever in a car accident caused by my own inattention, it won’t be because of my cell phone. It will be because of a song. When I hear things like this, I am cocooned from the world. I am enveloped in a silken sheet that folds me into the music. I am drowning in the song. Nothing else exists for those few moments. It’s like meditation, though my mind isn’t empty. It’s saturated. To me, Heaven would be songs like this on continuous play.

I am sorry that such a gorgeous thing began from sadness. I am thankful that artists have the courage to share. 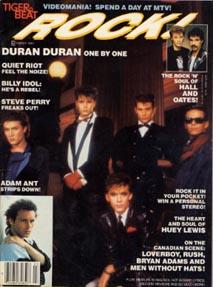 Today is the day.  Thirty years ago, I wouldn’t even have dared to wish it, the prospect was so fantastic.  But it is actually happening this evening.  I will meet John Taylor of Duran Duran.

And I have to say that the sensation is not the elation and thrill that I would have had thirty years ago.  It’s actually quite odd.  It’s the feeling that I am taking my daughter to meet Justin Bieber… only the mother and the child both reside in me.

Two friends and I are attending a book signing event for John’s just-released autobiography In The Pleasure Groove.  I finished the book yesterday and definitely recommend it to Duranies and fans of 80s music.  It’s also a good read if you like biographies of musicians.  The book is more honest and intimate than many in its recollection of the rise and fall of fame and addiction.

My expectation, since he’ll be signing books, is that each of us will have our 30 seconds (or less) to exchange conversation.  And I have no idea what I am going to say.

The preparations for this were all about giddiness, recapturing that feeling of 14 so that I could maximize this opportunity, because it never would have happened thirty years ago.  The heady excitement suits the occasion. But, the thing is, I am more the mom now than the girl.  And the mom has spent this day with a very bad cold, schlepping through Costco for Halloween preparations, loading and unloading washers and dryers, and still needs to figure out something to say that won’t embarrass her or the 14-year-old she used to be.  That girl, though hidden under layers of midlife wrinkles, etc., is still present on some level, and she would be mortified enough for both of us if I said something trite, stupid or obvious.

My husband says I should make him laugh, relieve the banality of signing book after book to a bunch of midlife female fans.  The specifics of his suggestion are a little odd, as they have to do with an unusual comment one of our male friends made about him a few years back.  I’m not sure I’m that brave.

I’ve thought about commenting on the book or asking how Nick Rhodes is doing (as I was a ticket-holder for one of the cancelled tour dates in August).  I’m probably going to wing it, my two friends in within earshot and the 14-year-old me peaking out from my eyes hoping that I don’t completely embarrass her.  It will be interesting to see what I come up with.