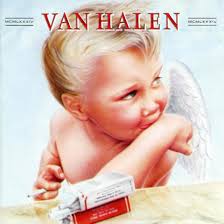 It’s a sweltering August evening. I’m in the front passenger seat of a sleek black sports car listening to music at high volume in a parking lot somewhere in Northeast Indiana. It’s 1984.

Not the year 1984… rather, the CD my husband and I were cranking after coming from an anniversary dinner to the resort where we were married.

But it could easily have been 1984 in the same vicinity, in the same month, on a similar hot night, in a (much likely) less impressive car with the same CD playing. In fact, that anniversary evening, I had that sensation that is not quite deja vu and not quite flashback, a cocktail of past and present that reminds you that some moments line up on a parallel. There are things in your life that don’t just remain the same… they keep popping in at various points, layering on new meaning each time.

I remember the weeks before 1984 was released. There was all manner of speculation about what the album would be. It was a bold statement to name the album after the year, as if it would be the artistic statement that summed up the era. I would be surprised if that was the band’s intention. The real big news was that Eddie played keyboards on it.

When I first saw the video for “Jump” on MTV, it was actually kind of disappointing, because I listened (and still do) to Van Halen for a harder, more swinging sound. But as soon as I heard the rest of the album, I could overlook it. The one thing it did was open the band up to broader air play, which used to be a much more important thing for a fan than it is now.

There’s something about Van Halen, and especially 1984, that reminds me of being young, more than any other music from that time. In a way it enables me to experience that feeling even now. So, while listening to 1984 might not seem an obvious choice for celebrating a wedding anniversary, it was perfect for my husband and me.

Coincidentally, today is Eddie Van Halen’s birthday. It’s a fitting way to wrap up my week of birthday blog posts on songs that shaped my life. 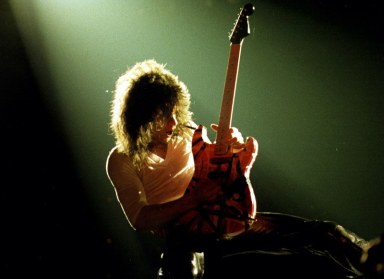 When I was a teenager, there was no greater testament to a guitar player’s skill than the following statement, “He can play ‘Eruption’!” (Yes, it was always a he.)

When Van Halen came to my hometown in 1984, it was a colossal event. My friend’s older brother was allowed to stay overnight in line at the venue to score tickets. We got one for everyone, except the guy I had decided to date just because he wore the same hat John Taylor did in the “Hungry Like The Wolf” era. Although he was a drummer, he didn’t care for Van Halen. But, he ended up buying a ticket from a scalper for a lot more money simply because he want to tag along.

On the afternoon of the show, Mr. John Taylor Hat was working his usual job as an usher at the movie theater.  He was sent in to take care of some loud viewers on whom the rest of the crowd’s pleas for quiet had no impact.  Alex Van Halen was one of the offenders.  They talked about the concert that night, and my date mentioned that he was taking me.  Alex handed him two backstage passes and told him to come by after the show.

After a great performance that was not hindered by my very grumpy seat-mate, we walked to the backstage area to see how well the passes worked.  The opportunity to meet Eddie Van Halen was worth having to hear my date heckling David Lee Roth throughout the show. Among the girls I knew, few understood the magic of “Eruption,” so with that and  a story about meeting Eddie, no one would dare question my right for a seat at the rock-and-roll table (the one that dudes sit around posing questions like who’s the greatest guitarist or who’s the best drummer, etc.)

As we walked through the threshold, no one seemed to notice us, so I said to my companion, “Let’s just be casual and walk around like we belong here.  No need to get the passes out unless they ask, right?”  But he seemed determined to ruin everything.  He said, “No, we need to wear these,” pulling one out of his pocket and putting it around his neck.  Within two seconds, a very large security professional escorted us out the door.

The minute we were out of earshot, I started yelling at him for blowing our chance.  Two guys from my high school were lurking around the area and heard us arguing.  They offered to take the passes off our hands… for $100 each.  My soon-to-be-ex-boyfriend moaned in disgust at the whole incident and wouldn’t let the passes go.  Tragedy was a great motivator for his art, and this was the best that our short relationship had delivered.  He shook his head, slumped his shoulders and dragged his feet toward the parking lot.  Only because I needed a ride home did I follow him.  (If only texting existed in 1984!) We never went out again.

Years later, I’ve seen Van Halen two more times with my husband who is as appreciative of the band as anyone I’ve ever met. I can’t say that he could play “Eruption”… at least I’ve been told not to.